In response to the death of George Floyd and the Black Lives Matter movement, a group of theologians created an online vigil as a space for restorative healing through sacred lament. Cecil Tengatenga and Natasha Huang write about the need of spirituality in times of crisis.

Another black man has unjustly died within weeks from others in America. Where might restorative healing be found for those left to seek racial justice? Does it come with a splatter of symbols and letters on a smartphone screen like the hashtag #BLM? How are practical theologians making sense of the Black Lives Matter movement?
George Floyd was in police custody when it happened. He was 46 years old. Social media quickly broadcast video footage of his final seconds alive. It bears witness to a grotesque image reminiscent of public lynching in America.  His last words, like many before him were, “I can’t breathe!”

His death is a chilling reminder of the entrenched roots of racism in America. It has also become evident around the globe that this is not just an experience shared by black people in that country. In Australia and other places, solidarity protests have erupted, equally bringing to light the plight of the disinherited everywhere.

On May 30th, 2020 a group of seminary friends planned a virtual vigil on Zoom that drew 60 responders to lament George’s death, in an act of sacred resistance against systemic racism and police brutality. Within 48 hours, they planned 40 minutes of prayers, music and symbolic ritual. They were subsequently joined by participants from all around the globe.

Yet as the week progressed, it became apparent that spiritual healing had to also spill over to infuse the energy of those marching on the streets in real-time.
Therefore, on June 5th, 2020 a virtual mobile clinic was set up to follow a rally in New Haven, Connecticut. In the clinic were self-help mental health apps and 10 chaplains, therapists and artists waiting to process grief with the 5000 protestors who had shown up at the event. Anyone could join by taking a picture of the QR code circulating on social media.

In what follows, we share reflections on the Black Lives Matter movement from diverse voices. These are excerpts of responses and commentary illustrating a revival of faith and spirituality as moderating a new frontier for loss and hope in collective action as we endure a raging pandemic.

What does liturgy entail when taking place online?  The following section highlights moments from our virtual vigil, showing that even from an online distance, liturgy is indeed “the work of the people.” 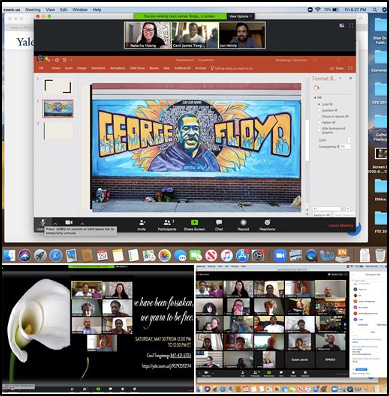 For the hosts of this vigil, the “work of the people” began in the planning of the liturgy.  The planning team consisted of an Anglican Bishop and a Methodist pastor, as well as the authors of this piece.  We invited friends—clergy, scholars, composer-musicians, and activists—from Lutheran, Methodist, Seventh-Day Adventist, Mennonite, and Pentecostal traditions to help us conduct our vigil.

Our friend Jon, originally from Lancaster, Pennsylvania, agreed to read part of our lament:

White bodies are sacred – and yet… We acknowledge O God that white bodies, though created in goodness, have collectively have become reflections not only of you – not only of Love, or Justice, or Compassion, or beauty – but also of a system of violence, power, fear, and greed reigning terror upon others.

The lament continues, read by our friend Randy, originally from Jamaica:

Holy One, We know that you are the Maker of all.
Your hand, your spirit, your glory is reflected in the beauty of creation, vast in its manifestation of size, shape, color, and personality.

Hold tenderly all who are afraid.
Weep with all whose hearts are ripped open by each act of violence or injustice.
Rage with those who wish to tear down every word, structure, and symbol of racist power.
Give us each the discernment to hear what you would have us do – today and everyday going forward until all your people are free.

Fill all your people who are committed to resistance with strength and courage. Ground them in the assurance that bearing witness to Justice and Love will lead to dismantling injustice.

Jon and Randy, a white man and a black man, embodied the interconnectedness of our common humanity, under a system that dehumanizes both by privileging one over the other.

Pentecost Sunday was the next day, and our liturgy involved international voices – Spanish, German, Patois, Chichewa – in addition to English, as well as sung lament and instrumental playing.  We highlight below how our virtual vigil touched individuals from all races, ages, and sexual orientations.

First, we amplify one voice, who shares her identity as

… an African American woman. A passionate follower of Jesus, [drawn to the vigil through a] desire to cry out to God in community, to honor George Floyd and the many others senselessly murdered due to racism and to unite with fellow justice seekers in a prayerful atmosphere.

She further reflected that “The use of music was very meaningful. The symbolism of the candle and the collecting of words was poignant and lingered with me.”

During this portion of the vigil, I (Cecil) had undressed and washed my hands—symbolically taking on the pain of humanity—and extinguished 46 candles, which both bore witness to and expressed the grief of George Floyd’s life being taken and leaving, at the end of the ritual, only the faces of those of us who remain. I see your pain, we are going through it together. This blending of an African tradition, using lights, and a sacramental theology of incarnational death leading to reconciliation, and performed on a digital space, stirred participants from reflection to action, from lament towards activism.

In response to this act of symbolic ritual, the African-American woman shared this commentary:

The vigil provided a space to unite with others in deep sorrow and hope. It also ignited my desire for courageous action. Faith and spirituality are foundational and essential in fighting against systemic and racial injustice. It is the light of Truth that exposes the lies and strongholds that perpetuate this darkness. It is the source of wisdom for organizing and strategically tearing down the hatred and prejudice. It empowers us to forgive and bridge to racial reconciliation. It is the grace that transforms hearts and minds and ultimately communities.

I am Colombian American and identify here as a non-black Latinx. I came to American as an undocumented immigrant. Lately, due to the pandemic, I have been sheltering my sister’s kids who haven’t been with their mother for these last 64 days.  I wanted to show solidarity. I had been struggling with working through the guilt of my light skinned privilege. It has been lonely trying to unpack the anti-blackness that has been woven into my upbringing. I am the light skinned among my siblings and I grew up with anti-black narratives among my family members. I saw what it did to my [darker-skinned] siblings and it always has been hurtful.  I’ve been seeking healing circles [such as the vigil] where I can find them and working to bring this same space for my students, who themselves need support.

Several of our participants went on to peacefully protest in their cities of residence.  As the only woman clergy of color at a protest, one participant said:

I realized that the vigil that we did… actually nourished [me]–I don’t know how I did all that I did this week [as a pastor], except that I fueled myself at the top.  And gathering together for a virtual space…where we could grieve and mourn, helped make space for me to grieve and mourn with others.

In the same spirit of holding space for lament, we held a tele-clinic for activists and protestors, with volunteer counselors hailing from all over the U.S.–as well as Canada and Germany.  The following section offers snapshots of the virtual space we provided, along with meditations offered by counselors. 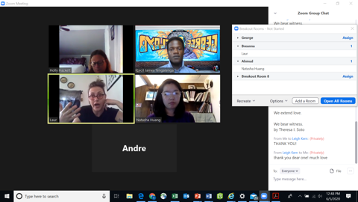 At the end of the tele-clinic—which included pastoral and psychological counselling 30 minutes sessions with community members who called throughout the 8-hour hotline—the volunteers offered these meditations:

May you lean into your community networks where you are held with love and seen by eyes who know what’s in your heart. Resiliency comes from community care.

„My body is thirsty for this water….For the water of life…When will we get to drink it? And to tremble with joy with the multitude of the poor, with the trees and the flowers, with the fishes and the birds, with the stars and the moon, with the wind and the rain, with the snow and the dew, with the sun and the entire earth.“ Ivone Gebara, Longing for Running Water 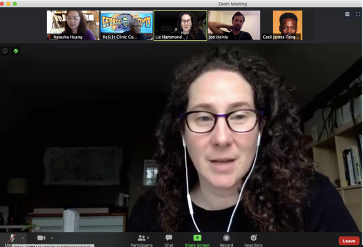 We honor their presence.

DaJavon David, Connecticut is a therapist who counsels youth and families and shared this resource with meditation for black families and their families to promote mental wellness through the upcoming months of rallies and demonstrations.

Whatever may be the tensions and the stresses of a particular day, there is always lurking close at hand the trailing beauty of forgotten joy or unremembered peace.“ (Howard Thurman)

May you find strength to carry on in your work for restorative justice, may you feel the solidarity of persons around the globe. And may no-one ever have the power over you to take away for you to discover forgotten joys and places of peace despite and because of what we are going through. Be well my friend. 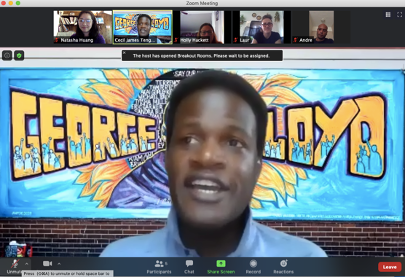 We have allowed the voices of those touched by our Virtual Vigil and our Tele-Clinic to largely speak for themselves.  We hope to have highlighted the growth of the Black Lives Matter movement into one that is both intersectional and international.   May these voices amplify the perspectives from those touched by “the work of the people.”

Natasha Huang is a second-generation Taiwanese-American currently residing in Southern California as she pursues a Ph.D in Practical Theology. She first became an ally for Black Lives Matter while getting her master’s degree at Yale Divinity School.

is a proud partner and dad in New Haven (CT, USA) where his family has a tiny backyard farm with chickens and lots of wild birds. He is a practical theologian/health scientists working on the intersection of bioethics and biotech applications in healthcare and education. View all posts by cecil tengatenga 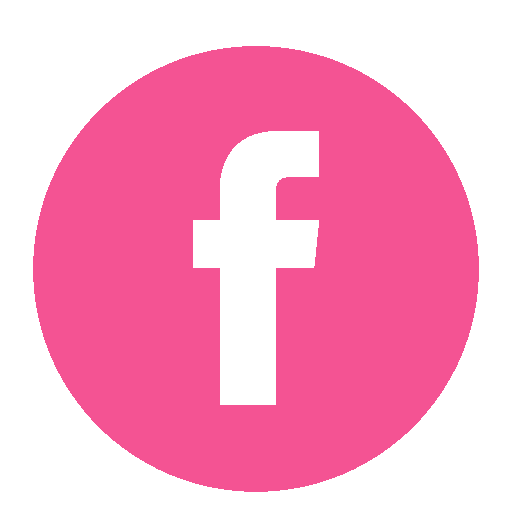 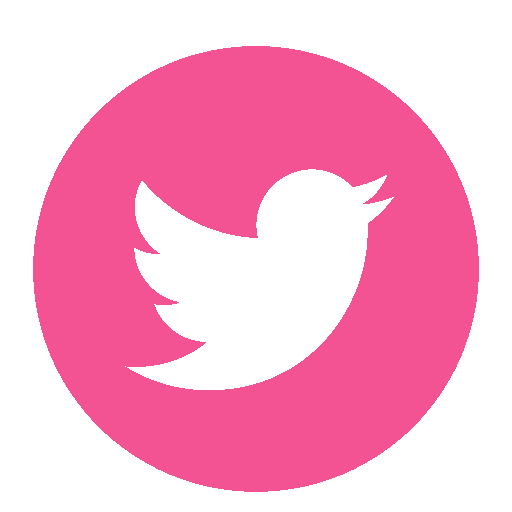